Lucky Lady Saira (Old interview, which was published just after AR Rahman's engagement with Saira , Thanks to AM Arvind and anything for arrahman

This is from Tamil magazine Ananda Vikatan dated 2nd Feb 2011. Ananda Vikatan has a section called pokkisham in which they publish articles, photos, interviews from old issues of their magazine. In the 2nd Feb issue, they published an article from 12th Feb 1995 (just after ARR's engagement with Saira ma'am)

Here's the scan of that article 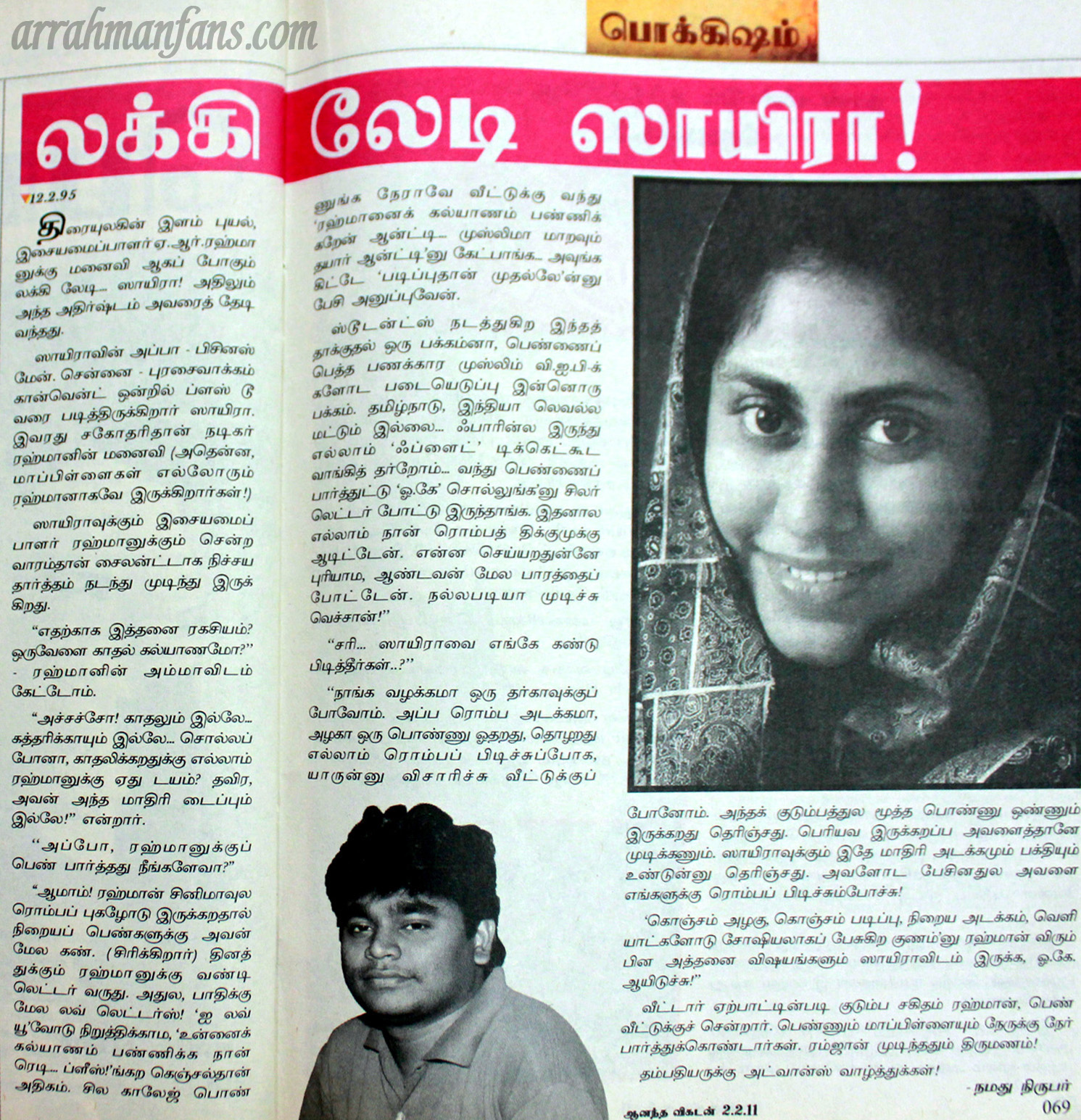 Is this a love marriage? We posed our questions to Rahman's mother.


Oh, not at all. This is not a love marriage. Where does Rahman have the time to fall in love? Moreover, he's not that type of guy!, she said.

So, you found a bride for him?, we quizzed.

Yes. Since Rahman is so popular in films, several girls have an eye on him, she laughs, and continues, Every day, Rahman gets loads and loads of letters. More than half of them are love letters! Most letters even go one step beyond being just love letters, and are actually requests like i'm Ready to marry you. Please say yes. A few college girls have come home and approached me with proposals. I want to marry Rahman, aunty. I'm willing to convert to Islam for him, they would tell me. I'd send them off advising them to focus on their studies.

If it is college girls one one side, on the other, we have parents of wealthy Muslim VIP families. This is not restricted to just Tamilnadu or or even India. But, parents from other countries too approach us. One family wrote to me saying We'll mail you the flight tickets. Just come here, see our girl and give your approval. I was overwhelmed. Not knowing what to do, I left everything to God. And, He gave us a good solution!

Ok, from where did you find Saira, we asked her.

Once when we went to the Dargah which we visit regularly, we noticed a beautiful, homely girl praying so devotedly and we instantly liked her. We inquired about who she is and then went and met her parents at their home. We were told that the girl who we saw at the mosque has an elder sister, and that she's as beautiful and pious. Since there is a norm that the elder girl should be married off first, we met Saira, the elder sister. We spoke to her and we really liked her.

She fulfilled all the criteria which Rahman looked for “ a little beauty, a little education, lots of humility, willingness to talk socially with outsiders “ she had everything, she said.

So, as arranged by their family, Rahman went with his family, to the bride's house. That's when the bride and groom met for the first time. The wedding is slated to happen after Ramzan.

Advance wishes from us to the couple.